The government’s crackdown on drug trafficking has resulted in the arrests of more than 17,700 people for various drug offences and the seizure of more than 170 kilograms of illicit substances so far this year, an official from the National Authority for Combating Drugs said yesterday.

“Since the campaign began, our police forces have tackled 8,094 cases related to drugs and arrested 17,747 people, including 7,851 drug users,” Lt Gen Vyrith said.

They also confiscated around 173 kilograms of drugs including heroin, cocaine and crystal methamphetamine, in addition to 113 kilograms of marijuana. Authorities also destroyed 275,815 marijuana plants.

“A total of 9,896 suspects have been detained for their involvement in drug trafficking throughout the country,” Lt Gen Vyrith added. 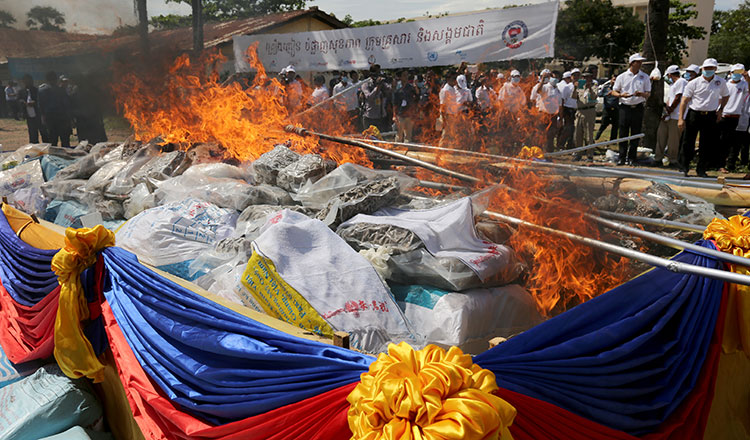 The report showed that among the 9,896 people detained, 255 were foreigners.

“The majority of foreign suspects detained were Lao, Chinese, Vietnamese, Nigerian and Venezuelan,” he noted.

Early this year, the government began its campaign to fight illegal drugs, in a bid to protect the welfare of citizens and prevent problems caused by drug use.

Interior Minister Sar Kheng has promised $10,000 rewards for police officers who seize one kilogram or more of illegal substances. He added the rewards are intended to encourage police and other officials to take action against drugs.

“Any official who seizes one kilogram of drugs will receive a government reward of 40 million riel, or about $10, 000,” Mr Kheng said.

In October, the ministry also warned guesthouses and clubs they would face the law if they did not increase their efforts to ban illegal drug use in their facilities.

The ministry said it had taken note of lackluster cooperation from private businesses such as guesthouses, clubs and karaoke bars.

Deputy National Police commissioner General Mak Chito said these institutions had been warned in the past and not heeded the call.

“We cracked down on drug offences at some guesthouses and night clubs in the past,” Mr Chito said. “We have more participation from those business owners, but there are some locations that seem not to cooperate, which means we have to appeal to them again and warn them that further non-cooperation will lead to jail time.”

According to a report by NACD, there are 18,554 drug addicts in the country.