Bangladesh to build one of world’s largest refugee camps for 800,000 Rohingya

Bangladesh to build one of world’s largest refugee camps for 800,000 Rohingya

Bangladesh on Thursday announced it would build one of the world’s biggest refugee camps to house all the 800,000-plus Rohingya Muslims who have sought asylum from violence in Myanmar.

The arrival of more than half a million Rohingya Muslims from Buddhist-dominated Myanmar since 25 August has put an immense strain on camps in Bangladesh where there are growing fears of a disease epidemic.

A Bangladesh minister gave details of the mega camp as Myanmar’s army blamed Rohingya militants for setting fire to houses in troubled Rakhine state in recent days to intensify the exodus of the Muslim minority across the border.

Bangladesh authorities plan to expand a refugee camp at Kutupalong near the border town of Cox’s Bazar to accommodate the Rohingya.

Seven-hundred-and-ninety hectares of land (2,000 acres) next to the existing Kutupalong camp were set aside last month for the new Rohingya arrivals. But as the number of newcomers has exceeded 500,000 – adding to 300,000 already in Bangladesh – another 400 hectares (1,000 acres) has been set aside for the new camp.

Mofazzal Hossain Chowdhury Maya, minister for disaster management and relief, said all the Rohingya would eventually be moved from 23 camps along the border and other makeshift camps around Cox’s Bazar to the new zone.

“All of those who are living in scattered places … would be brought into one place. That’s why more land is needed. Slowly all of them will come,” the minister said, adding families were already moving to the new site known as the Kutupalong extension.

The minister said two of the existing settlements have already been shut down.

This week Bangladesh reported 4,000-5,000 Rohingya were crossing the border eachday after a brief lull in arrivals, with 10,000 more waiting at the frontier.

The United Nations has praised Bangladesh’s “extraordinary spirit of generosity” in opening up its borders.

But UNICEF chief Anthony Lake and UN emergency relief coordinator Mark Lowcock said in an appeal for $430 million to provide aid that “the needs [of the Rohingya] are growing at a faster pace than our ability to meet them”. 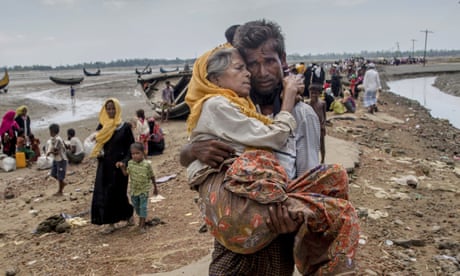 “The human tragedy unfolding in southern Bangladesh is staggering in its scale, complexity and rapidity,” he said in a statement calling the Rohingya crisis “the world’s fastest developing refugee emergency”.

Rohingya who have made it to Bangladesh allege the spurt in arrivals follows a new campaign of intimidation by Myanmar’s army in parts of Rakhine which were still home to Muslim communities.

But the office of Myanmar army chief Min Aung Hlaing said blazes at seven houses in a Rohingya village in Buthidaung township early on Wednesday were started by “Einu”, an alleged militant from the Arakan Rohingya Salvation Army (ARSA).

The refugee crisis erupted after ARSA raids on Myanmar police posts on 25 August prompted a brutal military backlash. The UN has said the Myanmar army campaign could be “ethnic cleansing” while military leaders have blamed the unrest on Rohingya.