A judge from Phnom Penh Municipal Court yesterday continued to question former opposition leader Kem Sokha on treason charges for conspiring to topple the government with a foreign power, despite the fact his lawyers have abandoned their right to participate.

Mr Sokha was arrested on September 3 after video footage from Australia-based CBN news was posted to Facebook, showing Mr Sokha saying the US government had been helping him to push for regime change in Cambodia since 1993.

This is the third time the judge has interrogated the former opposition leader in prison, and questioning is due to continue today.

Sam Sokong, one of five lawyers representing Mr Sokha, said the legal team had decided not to participate in the judge’s questioning.

He said the lawyers sent a letter on Tuesday asking for their client to be taken to the court, but that request was declined.

Mr Sokong said the court gave the reason that it had already scheduled questioning at the prison for yesterday and today. 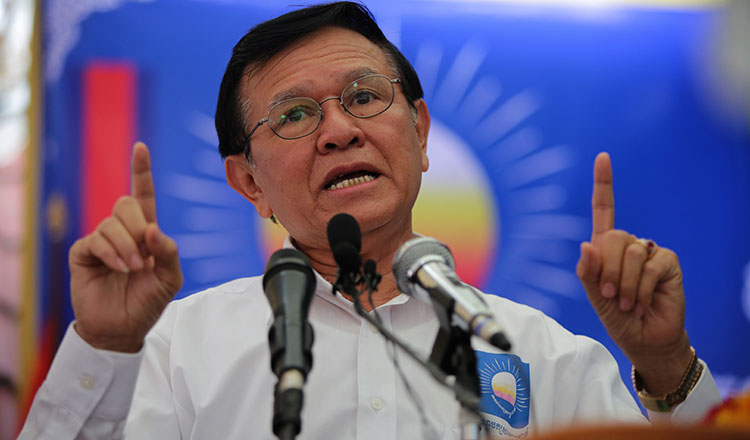 “The court’s response did not give enough of a reasonable explanation so we decided not to join the procedure,” Mr Sokong said. He added the law states that Mr Sokha is required to have lawyers to defend him in all circumstances, since he has been charged with a felony.

“If the judge continues to question him, that violates the rights of the defendant,” Mr Sokong said.

He said Mr Sokha’s legal team will file an Appeal Court complaint related to the investigating judge’s actions as soon as possible.

Justice Ministry spokesman Chin Malin said it is the right of the judge to decide whether to question a defendant in prison or court.

“The investigating judge has the discretion to make a decision about whether the defendant can testify in court or at the detention centre,” Mr Malin said.

He added the law does not stipulate that questioning must be carried out in court, only that proper trials should be held there.

“There is no obstacle to the procedures of the court, even if Mr Sokha’s lawyers don’t participate,” Mr Malin said.

“They have abandoned the right to defend him by themselves. It does not affect the court, only the interests of the defendant,” Mr Malin added.

Jihadis bank on bitcoin for fresh flow of terror funding