Nampo is believed to hold a number of rocket facilities – including a military shipyard where submarine-launched ballistic missiles are loaded onto Kim’s subs.

Security experts believe the hermit kingdom is getting ready for a major show of force next Wednesday. 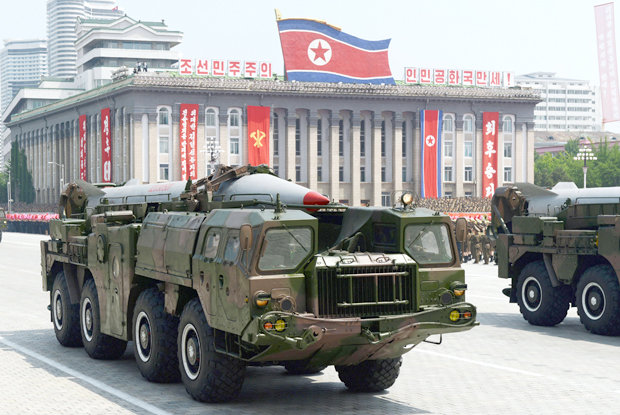 ARSENAL: A North Korean Scud missile on show in Pyongyang

The Chinese Communist Party is holding its 19th Congress on that day – October 18.

Kim is thought to be angry with China after it sided with Donald Trump to slap sanctions on its commie neighbour and ally.

The tubby tyrant is believed to want to remind Chinese premier Xi Jinping he won’t be cowed.

Interestingly, Nampo is out of range of Japan and the US territory of Guam – but missiles fired from there could reach key targets in China. 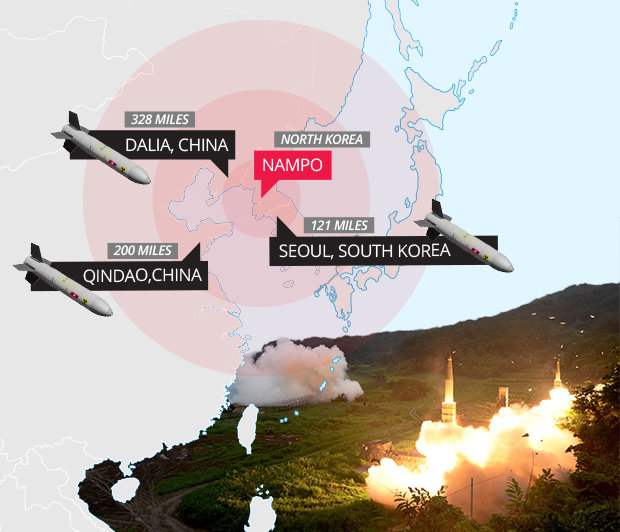 Scuds are Soviet-era missiles popular with dictators around the world, including Saddam Hussein.

But Nampo is also just 200 miles the Chinese city of Dalian, in Liaoning Prefecture, and 328 miles from Qingdao, in Shandong.

Both are major seaports just across the Yellow Sea from North Korea.

It seems unlikely that Kim would bite the hand that fed him so hard.

But he could fire a series of rockets into the sea to send a message to Xi that he is still a force to be reckoned with.

North Korea has pushed the globe to the brink of World War 3 with a series of missile tests this year – including two Hwasong-14 intercontinental ballistic missiles believed to be capable of delivering a nuclear warhead to the mainland US in July. 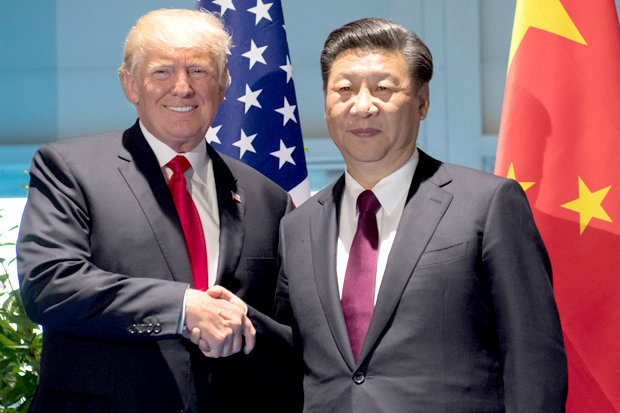 It fired two medium-range ballistic missiles over Japan in August and September in an apparent dry run for a strike on the US Pacific island of Guam.

The trigger-happy regime said it was preparing to test a nuke over the Pacific and was expected to carry out some kind of display of military might to mark the anniversary of the founding of the ruling Korean Workers’ Party on October 10.

But Kim has kept his hand from the detonator since September 15 – the biggest pause since the start of the year.

North Korea launched a barrage of short-range missiles – believed to be anti-ship missiles – in June after Trump moved an “armada” of warships to the region in a failed bid to halt Kim’s nuclear missile programme.

Trump has sent a nuclear sub to the area and nuclear powered aircraft carrier the USS Ronald Reagan is set to arrive there this weekend.